You are here: Home / FAMILY / Baby & Kids / How to Handle a Picky Eater
We earn money from clicks or purchases made via product links in this post.
Share
Tweet
Pin
0 Shares 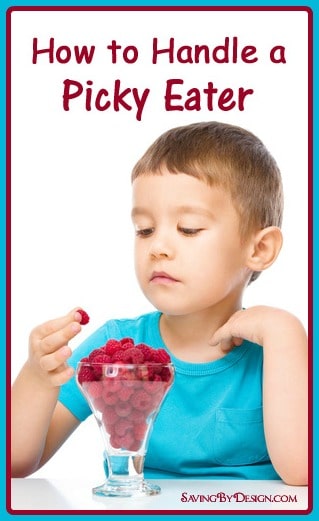 I have two beautiful children and 99.999% of the time I wonder what I did so wonderful to have God reward me with these precious little munchkins!  That other 0.001% of the time?  I’m trying to stuff food down their throats that I know they’d like if they would JUST. TRY. IT!  Now to be fair, my 2 year old will pretty much eat anything you put in front of her.  She has always been easy to feed and generally needs more than 1 serving to finally feel like she doesn’t have to scream for more.  My 4 year old?!?!  Exact opposite story!  He has always been a picky eater.  I made both of them homemade baby food when they were around 4-6 months old and I made just about everything.  I really wanted to expand their little palettes and make sure they were going to be open to new foods and different tastes.  It seemed to work with my 4 year old for about the first year.  Than… after he realized he could put up a fight, he did.  Ugh!

To this day, he pretty much subsists on hot dogs, peanut butter and jelly, yogurt, pancakes, and grilled cheese.  Sneak in something different?  He’ll eat around it.  Set him at the table for 2 hours until he FINISHES THAT PLATE OF FOOD?!?!  Ya…  he’s more stubborn than I am.  So I’ve been looking for ways to handle my Mr. Picky Pants and here are some things I’ve come up with.  Lord, let’s have some of these ideas work and give me the answers I need on how to handle a picky eater!

1. Give Your Child Control Over Their Own Menu

This actually makes a lot of sense!  To a point.  Because otherwise, we would have chips, candy, and fruit snacks consistently for dinner every night.  And ice cream.  Duh!  However… my son LOVES being included in the “adult” stuff.  It makes him feel important, which he is, and like his opinion counts.  So chalk up a double victory with this idea.  A self-confidence booster AND getting him to try new foods!  Have your child look through cookbooks with you that have pictures.  Tell them they get to pick one thing they like if they find a couple things that look different, but OK to try.  Make it fun for them and see what happens!

One thing I haven’t really done is switch things up.  For example, my son does NOT like carrots that are raw.  I think mostly because he doesn’t like the consistency and that they are a little to difficult to bite and chew.  But when there are cooked carrots, he definitely doesn’t seem to have as much of a problem with them.  Still a problem, but I can generally convince him to eat them… eventually.  I haven’t done this type of reverse behavior with other foods he isn’t into, but I definitely can see why it would work.  Some foods taste so different when they are cooked versus raw.  Or even if there are some dips for them so your child can “mask” some of that flavor but are still eating the item.  This one we are definitely going to have to make more of an effort to try out!

I’ve read in numerous places that it can take up to 15 tries of just putting the food item in front of your child over and over and over for them to finally accept it.  Granted… some things they may never like, as there are plenty of foods that I don’t like, but consistency is key!  I will admit, this is something I am good at.  I hate seeing food go to waste and I always feel that trying again and again is in vain!  But… this is a good reminder for all of us mommies out there that we need to just keep chugging along and trying to get our picky eaters to see we’re not giving up!  Even if they take just one bite of it, they are getting that taste and learning to expand their palette!

4. Use Appetite To Your Advantage

Try to stay as close as you can to a regular schedule for feeding the littles.  You’ll get a better sense of when they are their most hungry.  That’s when I go in for the kill!  I’ll serve new things when I know that at that particular minute, they just want to get something in their tummies.  It’s also easier when they are hungry to tell them that they have to have a few bites of XYZ before they can have something more appealing.  When they’re hungry and they know something good is coming up, there isn’t as much of a fight over trying something new.  Even if it’s just a bite!

Stick to small portions when introducing something new or when you are being persistent about trying foods they don’t love.  I learned this the hard way.  Picture it…  giving my little guy a bowl of cottage cheese, asking him to try it, having to run out of the room for a SECOND, just to come back to it completely all over the floor.  Oy…  so I’ve learned.  Little portions, maybe one or two bites, until it’s something that consistently will be eaten.  It makes clean-up a lot less work!

So I’ll admit.  I’m the WORST at this and I know I need to get myself in check.  I’ll try to give them something I know they aren’t crazy about.  They’ll fight back.  And I’ll cave and let them slide and eat the things I know they’ll like.  Because I want to make sure they eat!  They’ve suckered me.  There are a few times I held strong when my son REFUSED to eat what was for dinner.  And I let him.  And than 9pm rolled around and he was crying and sobbing that he was hungry.  So I gave him something small and quick to make sure he’d go to bed with a full stomach.  But…  I know my parents didn’t do that to me and I turned out OK (don’t say it…).  If I didn’t eat what was for dinner, I didn’t eat.  Enough said.  No back-up plan.  No waiting until I could cry up some sympathy.  Dinner was definitely not catered to around my palette!

I’m not above a little trickery to get my kids to try something new or to have them KEEP trying something I know they aren’t down with.  So…  maybe a little reverse psychology is in order?!?!  Make something or better yet… buy something at the grocery store when they are with you.  When they ask what it is, just tell them it’s “grown-up food” and they aren’t allowed to have it.  I know my son, and once I say something like that, the rocket fuel kicks in on how fast he can figure out a way to “try” it without Mommy seeing.  Try this approach a few times with different things and see what happens.  It definitely can’t hurt!

8. Make your own dinner

Finding some dinner ideas that involve “build it yourself” may help to give them the autonomy to create exactly what they like.  And if they’re staying away from everything you HOPE they put on their plate, give them a little nudge to throw a couple diced tomatoes on that taco salad to just TRY it.  It will blend up well enough with the other flavors!  Making things like pizzas, salads, tacos, or having a backed potato bar are all great things to get them involved with what will actually end up on their plate.

9. Get them involved with making the food

Another way to get them involved?  Have them help you cook and prepare the items!  My son LOVES helping me out in the kitchen and he loves to “taste test” what was made when we’re all done.  He feels so important and loves telling people that he helped Mommy make whatever it is we made.  So try making dinner with a few items you know they aren’t too hot about.  But by getting the kiddos involved and having them see what you do, and do a little taste-testing on the side…  it might just make the difference you’re looking for!

My son was NOT a fan of peaches.  At all.  I think it was just the texture, but once he gets something in his head, it takes some work to get him to change his mind!  So one day, we made a fruit smoothie and I threw in some peaches and guess what?  He LOVED it!  Focus on making unique items that incorporate the foods that your kids don’t like.  Create smoothies, vegetable and fruit purees (add into sauces or into recipes you’re making for dinner), soups, etc.  Anything that can use what they don’t love and can mask and hide the fact that it’s in there.  After about a week of having peaches in a few smoothies, I showed him what was going in it and he helped me make it.  He wasn’t too crazy when he saw peaches were included, but once he saw them get all mashed up and whipped down into the smoothie, he forgot all about it!  Score!

Starting tomorrow there is a new sheriff in town.  Me!  We’re going to see how some of these ideas might help to create a not-so-picky eater!  Some of these things I have tried and have had some success with, and others I know I HAVE to do and follow my own advice!  Wish me luck!

Any other tips for how to handle a picky eater that you’ve come across?  Comment below and let us know.  We’re always up for great ideas!  🙂

This site uses Akismet to reduce spam. Learn how your comment data is processed. 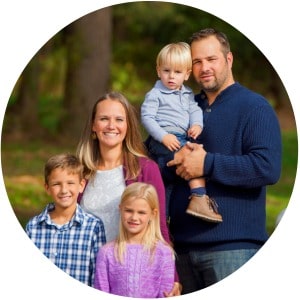 Hi there...I'm Kara! I'm so happy you stopped by! Here at Saving by Design, I’ll help you create a fabulous life without spending a fortune. Read More…

Tired of messy finances?
Let me help you get organized with this free 3-day email series!

We are a participant in the Amazon Services LLC Associates Program, an affiliate advertising program designed to provide a means for us to earn fees by linking to Amazon.com and affiliated sites.

Take control of your finances 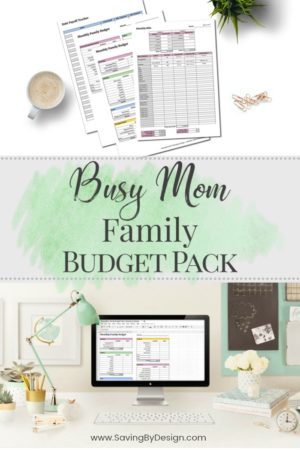